How to Retrofit a Farm Wisely While Following a Reasonable Budget

In Gestation : Animal Welfare and Regulations

Consumers and defense groups have put pressure on the government, such as in Europe, Canada or California, and on producers’ associations for the implementation of regulation towards the improvement of livestock welfare.

In swine production, the most significant change that was put in place is the change from individual gestation to sow group gestation. We are talking here about a major change in the way we raise our pigs and it has a direct financial impact on producers.

For new construction barns, having gestating sows in group-housing vs. individual stalls does not represent, most of the time, an additional cost to the construction. On the contrary, most of the time, we are talking about the same or lower amount to be invested, depending on the type of feeding technology selected (less equipment). However, in the case of a retrofit, the amount invested can quickly become outrageous. Then, we are questioning the way we are doing it while asking ourselves where we can lower those costs. Here are some strategies that should be well -analyzed in the case of a retrofit. 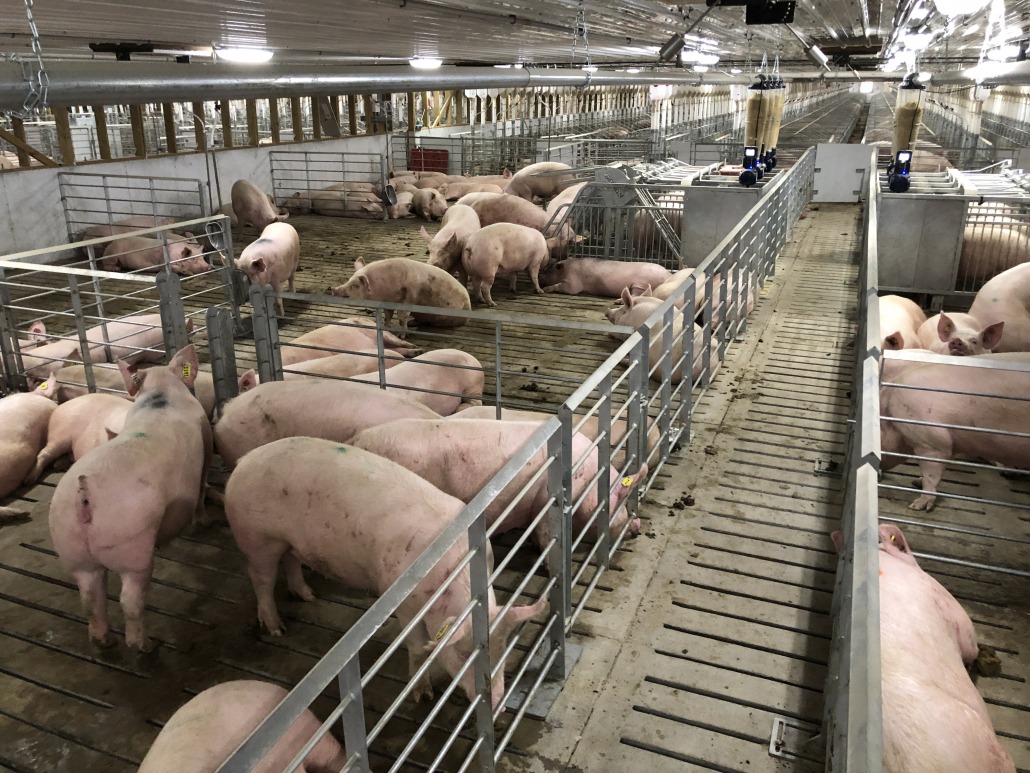 1. Playing with the Sow Inventory

Many producers will analyze the option to expand the gestation section in order to have enough space to meet the regulations’ square footage requirements without having to decrease their herd inventory. In this case, the building design and the techniques used (herd and feeding) will dictate the amount to be invested.

Plenty of feeding alternatives are offered to the producers. Some, more expensive at purchase (electronic systems), can help decrease the future feeding costs. Therefore, it is imperative to analyze all of the options.

Some producers will make the decision to decrease their herd inventory  to avoid expanding the building. The renovation cost will be decreased but a decrease in herd inventory means revenue will also decrease. For some, this is a possible solution since there is no succession, for example.

Some others will increase their herd inventory significantly by using the actual gestation crates for breeding crates. The new construction will therefore focus only on the group housing section and additional farrowing places. It’s a great way to increase the herd inventory at a lower cost/sow (CDPQ , Dec 2012). Learn how much it would cost to invest in Gestal.

Keeping the Floors and Making Compromises

For new constructions (without equipment), the flooring costs can reach up to 20% of the total investment. In the case of a retrofit, if the floor is still good, we must ask ourselves if we can keep the floor as it is or if we must change it.

Pen design is easy if we are working with new flooring. However, if the floors are kept from the old barn, compromises will  need to be made. We must also keep in mind that the last thing we wish to have is dirty gestation pens with increased injury possibilities for our animals. Some tips exist to reduce those risks. Keeping existing flooring is, of course, the cheapest solution. An animal welfare specialist could help you determine the cost associated with making such a decision.

However, sometimes, it is best to invest more money while doing a construction/retrofit of your gestation to have better performing sows/gilts. It is not uncommon to discuss with producers that observed sow mortality in pens is 2 or 3 times higher than with individual crates, and it is mostly because of musculoskeletal problems.

3. Choosing a 100% or Partially Slatted Floor

A slatted floor is more expensive (there are two floors after all) than a solid concrete floor. During the project analysis, it is a great idea to calculate the two options : 100% or partially slatted.

When the design is created according to sow needs while allowing different zones in the pens (rest, feeding, moving), it is possible to have clean animals with a complete concrete floor. Again, it’s a question of compromises.

4. Conform to Required Square Footage for Sows and Gilts

In some countries/states, the regulations for required space per animal are part of strict regulations and must be followed. However, in some other countries, the government gives  guidelines that include a minimum square footage per animal. In this case, producers have more freedom. In Canada, for example, the minimum space required per sow in mixed group housing is 18 ft2 (1,7 m2) on a partially slatted floor. Choosing such a surface brings more inconveniences vs. a bigger surface area, however, it allows to decrease the retrofit costs of dozens of dollars/sow.

Note from the author: With my experience, I like to discuss different details with the producer to decide the ideal square footage he would need for his herd. Genetics, feeding programs, historical mortality and replacement rates (mostly their causes), farm ventilation and producers’ behaviours are all points I analyze. The success or difficulty of a transition to group housing can, of course, depend on the surface area allowed, but a small area can be compensated with other variables (animal/feeding station ratio for ESF, pen design, etc.)

Alley width for transit animals and employees needs to be considered. We are, again, talking here about the surface area to build in the case of a new construction or to deduct from the allowed surface for sows in the case of a retrofit. Producers often have to compromise between working space and conversion cost.

In a 200 ft long building with two alleys, we are talking about tens of thousands of dollars  difference  between a 3 ft alley and a larger one. We need to reflect on the staff movements, on the sows, on heat detection crates for boars, on taking dead animals out. There is a cost for this alley. When taking sows in or out of their pens, we need to predict many animals moving at the same time. Do we want sows to be able to turn around in the alley or not at all? This is the producer’s choice.

Ideally primiparous animals should always be together when placing in groups. According to regulations, the square footage that requirement for gilts is different from that required for sows (in Canada we are talking of 15 ft2 (1.4 m2 )minimum for gilts and 19 ft2 (1.8m2) for sows. In a mixed pen, we are talking about the 18 ft2 (1.7 m2) mentioned previously.

For a group of 50 animals with 10 gilts and 40 sows, 10 ft 2 (1 m2) additional is required if we separate gilts from sows. No, it is not enormous. However, we must think about what the regulations allow and the advantages/disadvantages of mixing parities. There are important considerations for group housed pregnant sows. They need to be evaluated closely.

6. Choosing a Feeding System for Gestating Sows in Group

Evaluate the Feeding Systems : With or Without Competition?

Initial installation costs are vastly different from one system to another and it’s a well-documented fact (Prairie Swine Center). A floor feeding system is less expensive than an electronic feeding system (ESF), for example. However, we must consider operational costs that are associated with every option. The Gestal 3G is a versatile option. Being a free access smart feeder, it follows animal welfare requirements without the disadvantages of a traditional ESF. 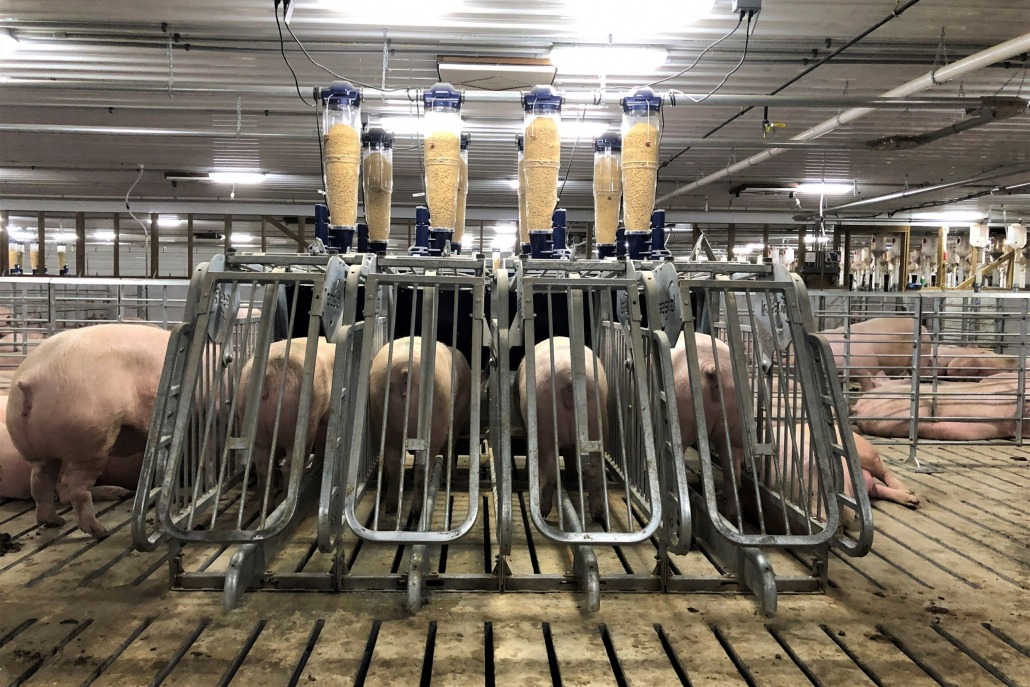 Additional feed cost, more frequent aggression between sows, gilt training and herd performance loss associated with the lack of control on  intake will eliminate the amount that was saved when buying the system. In addition, those losses are recurring from  year to year and go on until the system with competition will be taken off the farm. Calculate your costs well. Don’t be a penny-pincher!

In Farrowing : A Question of Space Available

7. Keeping or Eliminating the Front Alley in Farrowing Rooms?

In the case the producer decides to increase his sow herd, and so to add farrowing crates, the producer can choose to eliminate the front alley. This is a common practice in Europe. European producers often don’t have this available space and have impressive herd performance. The saved square footage can represent a large amount of money in the situation of a farm expansion or allow to install bigger farrowing crates in the case of keeping the same herd inventory.

Once again, the front alley has a cost, and we must think about if this space is mandatory. This is even more important if the decision was made to install electronic feeders in farrowing. In America, most specifically, we are used to working with front alleys. If it disappears, we have to keep in mind that we will need to get in the farrowing pens to get the piglets, to inject sows or to wash feed troughs. We recommend that you contact your veterinarian for approval of your changes. It is a major point to bring up. 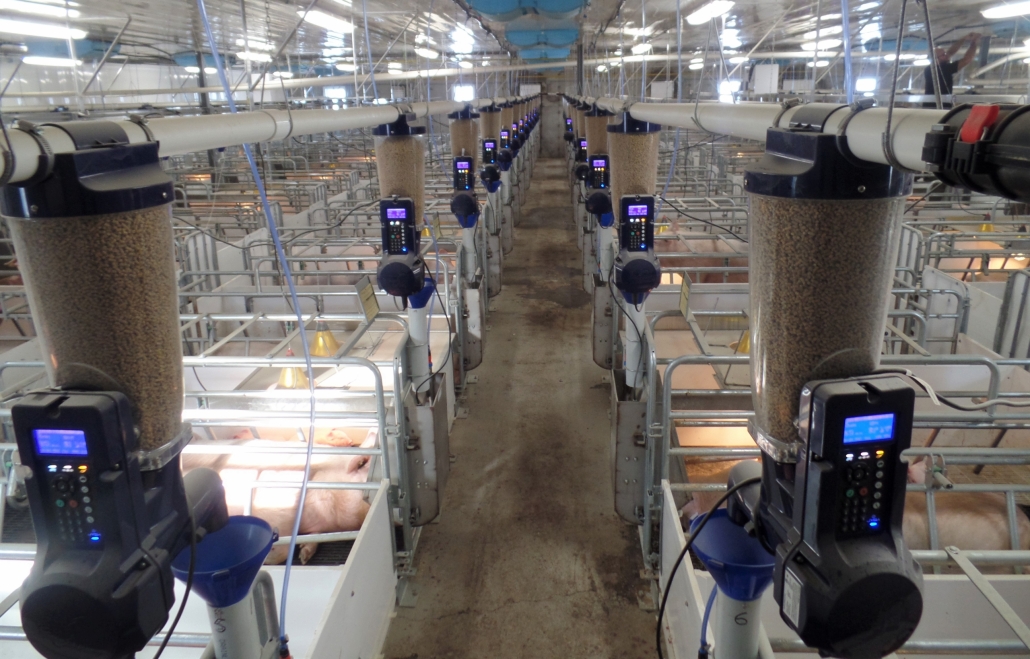 More often, in the case of new constructions or expansion for increasing the sow herd, producers go for larger crates in farrowing. This means more investment right away. However, there is no doubt that with modern sow prolificacy, we should not hesitate.

In the last years, we have observed an increased prolificacy in terms of born alive, but not in terms of weaned piglets. Pre-weaning loss is, majorly, the cause. Lifting/hydraulic crates can be an interesting solution. However, the cost for this technology is very high. If the producer has above average pre-weaning mortality, the option can be considered.

We just saw some ways to save on new construction/farm retrofit to meet with animal welfare requirements. We can also choose to downgrade in the material quality (less stainless steel, thinner plastic, etc.) but we must not forget that retrofits or new constructions are long-term investments. If we compromise, we must make sure that there won’t be any economic impacts in the future. Many elements impact the lifetime of farm equipment such as ammonia, feces and acids. The compromises you do should fit those important elements.

We are seeing more and more cases in which producers selected cheaper versions and had to replace again some years later because their herd performance was way lower than before group-housing. Just like in everything else, we often only get what we pay for. And remember that there is always someone willing to do it cheaper… 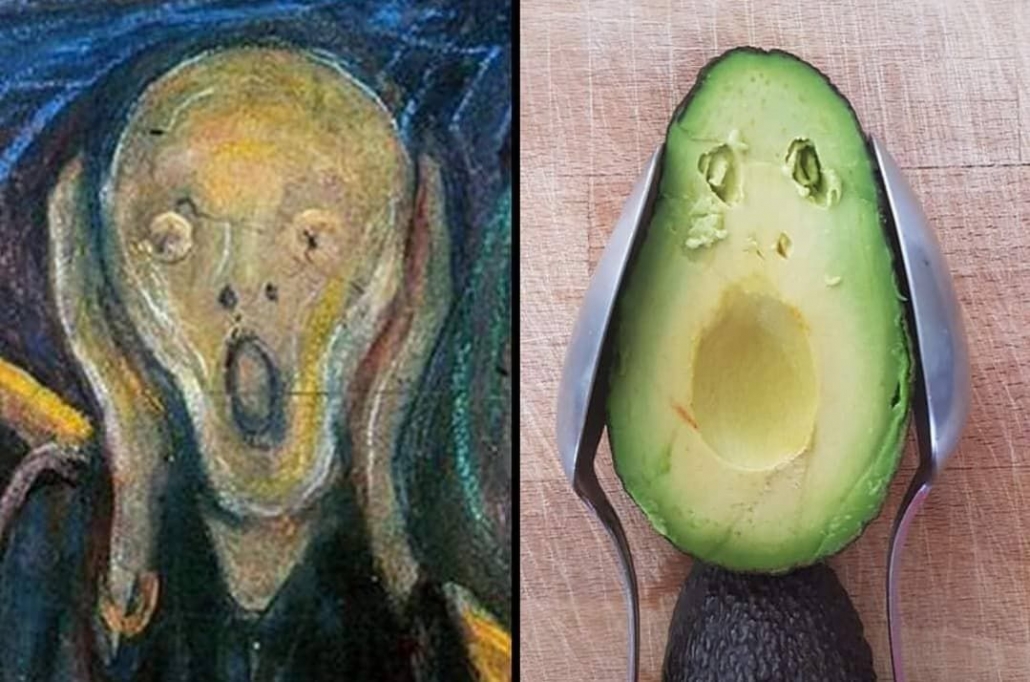 The Importance of Feed Intake in Lactation on Sow’s Productivity