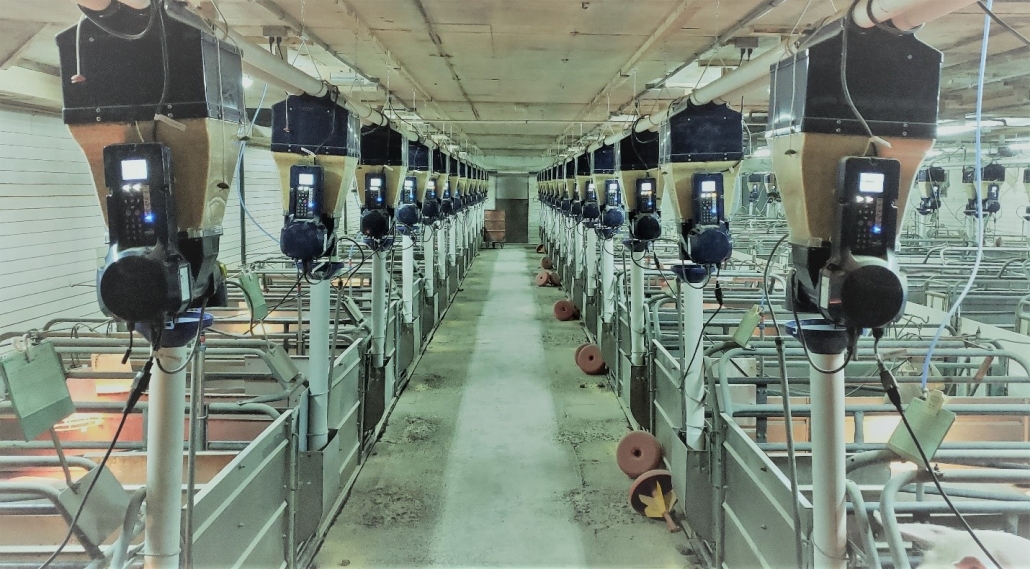 The next frontier in lactating sow nutrition

Advances in research regarding the nutrient requirements of the lactating sow have academics and producers alike realizing the need for feeding precisely to the needs of the herd, which can vary considerably from published values. For example, in the Swine NRC (Nutrient Requirements of Swine, published by National Research Council in 2012) gilt and sow nutrient requirements during lactation have different published values, as they are known to be in different phases of growth and productivity.

Research by Gauthier et al (2019) investigates the variability of nutrient requirements during lactation and is found to be highly correlated with litter growth rate. Additionally, parity and body condition are factors that impact the requirements of lactating sows, yet it is commonplace within the commercial swine industry to feed only one diet throughout lactation to all animals. Since it would require a minimum of two feed lines and bins to have the option of more than one lactation diet/nutrient level, we have mostly settled on a “one size fits all” approach to feeding the lactating sow.

**AUTHOR’S EXPERIENCE** In my own previous experience, I have seen several attempts at feeding specific diets to sows and gilts with feed lines dedicated to certain rows within farrowing rooms. Most of these attempts fail or are abandoned because of fluctuations in gilt numbers loaded per room or because staff simply fail to load animals according to their designated parity/row assignment for them to be fed properly. In my opinion, it is important to have the option of feeding any diet or combination of diets at any location if you choose to feed multiple diets or blends in lactation. 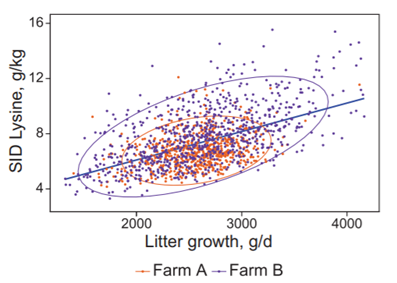 While some progressive sow farms have made the move to install separate feed lines for designated gilt rows in lactation rooms, it should also be considered that an animal’s nutrient requirements may change from day to day based on stage of lactation, number of pigs nursed, energy status, and overall stage of growth of the sow/gilt .

Very few feeding systems allow for the use of multiple diets and their blends in lactation, but these programs allow for precision feeding to the estimated requirements of a gilt or sow as it fluctuates throughout lactation. The Gestal Quattro is one of those.

Several key areas in lactation can benefit from the use of feed blending in lactation, outlined below.

Key area 1 : Blending to meet requirements of the animal

Within a lactation room, multiple parities and body conditions are present during each turn, and the gilt and sow vary considerably in terms of actual requirements. First, nutritionists are generally formulating to gilt requirements since they often cannot physically consume enough to support both the requirements of their own growth as well as that of milk production for a litter. Consequently, mature sows who need instead to be fed on g Lys/day basis and do not have additional growth requirements, are often overfed amino acids (AA).  With measurements of ADFI (Average Daily Feed Intake), day of lactation, and number of pigs nursed, we can more accurately feed to an animal’s specific requirements if the feed system allows.

Although we are overfeeding approximately two thirds of animals (mature sows) in the lactation rooms with this widely implemented current approach, gilts and second-parity animals are often losing a considerable percentage of body weight during lactation and can struggle to breed back, leading to further downstream performance implications.

As outlined by Strathe et al (2015), the lactating animal’s nutrient requirements are often highest in the second week of lactation, in which nutrient requirements for milk production outstrip the available resources due to feed intake that is still increasing. In particular, first and second parity animals, as well as animals in the second week of lactation would stand to benefit considerably from having access to a more nutrient-dense diet. 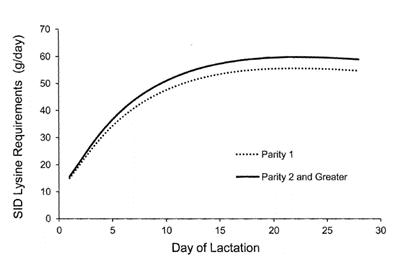 Figure 8-8 (Swine NRC, 2012) demonstrates that SID Lys requirements are generally highest in the second and third week of lactation.

Preliminary modeling based on current SID Lysine levels fed in lactation indicate that a producer could save between US$3.00 and $6.00 per gilt per lactation, and between US$5.40 and $8.90 per sow per lactation with feed blending between two diets (0.53 and 1.25 SID Lys; prices sourced December 2019) to meet requirements. Based on those estimates, feed blending technology in lactation and the associated infrastructure could pay for itself quickly.

In the previous example of providing a more nutrient-dense diet to younger animals and animals in a negative energy balance, this allows for a concentration of resources on animals who can benefit most from a more expensive feed, while mature animals and those whose feed intake is satisfactory for maintenance and milk production can further save money by consuming a cheaper ration.

Additionally, as many producers transition to longer lactation periods, they could further benefit from the ability to feed a lower-cost, less nutrient-dense diet since ADFI is generally high in late lactation.

Key area 3 : Blending to mitigate the impacts of heat stress

In periods of heat stress, voluntary feed intake of sows will decrease up to 22% (Silva, 2020), and feed blending could be used to modify rations and deliver a more nutrient-dense diet during periods of heat stress. If a producer can feed a more nutrient-dense diet and achieve the same energy and AA intake with 22% less intake, this could prove to be an effective method of mitigating summer heat stress and its effects on both sows and litters.

Feed blending could be paired in this scenario with additional technologies common to electronic feeders that are able to stimulate sows to eat during cooler parts of the day. Since heat stress is applicable everywhere, we developed strategies to dodge temperature variations.

Given that the modern prolific sow is not consuming markedly more feed per day, yet is raising more pigs per litter, it is no surprise that many producers struggle with excess body condition loss during lactation as the demands of lactation have increased. The importance of animals leaving lactation without a large loss of body reserves is imperative in the reproductive cycle, and it is an area that producers continue to struggle with, especially in young females. Loss of large amounts of body reserves in lactation can lead to irregular returns to estrus, poor subsequent reproductive performance, and ultimate early culling from the herd.

As many producers are beginning to question the high culling rates which have become normal in sow herds, many are looking for options to reduce the number of young animals exiting the herd prematurely. The herd retention rate (greater than 50%) speak by itself on the necessity to find solutions to reduce the culling rate. Feed blending in lactation is an additional tool that may reduce the number of animals who are culled for reproductive reasons after the first and second parity.

The future of feed blending in lactation

Many producers are implementing “smart” systems and technologies into their operations to streamline barn data collected and to make decisions easily. Within these technologies and for feeding equipment in particular, models such as those posited by Gauthier and Dourmad’s InraPorc model can be used to adjust for changing nutrient requirements based on changes in parameters such as feed intake, number of pigs nursed, and stage of lactation. Implementation of such programs is the next step towards accurately feeding to variable sow requirements and decreasing feed costs. 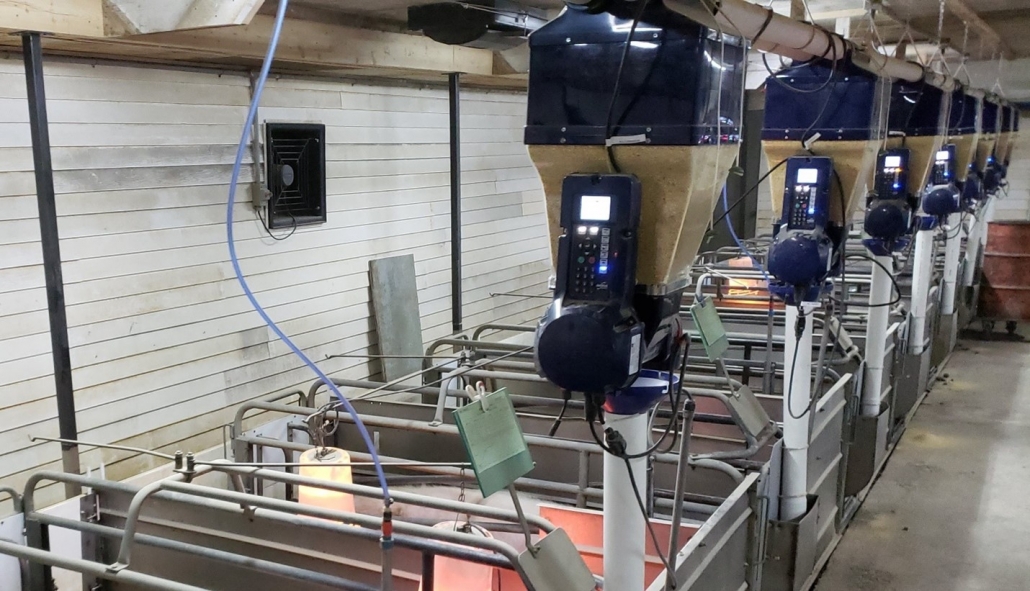 How to Retrofit a Farm Wisely While Following a Reasonable Budget