Not everyone will agree with my arguments in this article. However, I’m tired of hearing complaints about current sow mortality rates and general agreement that additional research is needed in gilt development; yet remain disappointed in the lack of tangible, practical strategies that producers can take home and implement at the ‘slat level’ to make meaningful changes in their herd retention.

Frankly, I think it is embarrassing that we have become so numb to the current levels of premature culling and sow turnover in North American sow herds. Still, I think it is best to put the ‘warm-fuzzy’ feelings around animal welfare aside and just look at the economics. Most studies have shown that a sow does not generate a positive return on investment until she reaches at least parity three (Stalder et. al., 2003; Gruhot et. al, 2017). And yet, as shown by the annual trendlines from Agristats and SMS below, which represent a significant portion of the US sow herd, a large portion of the industry fails to reach this economic threshold for their average sow parity. 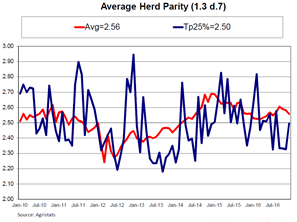 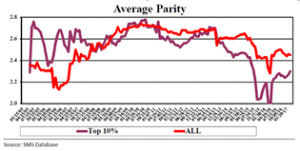 At a time when many systems are bearing the brunt of poor market prices on overall revenue, it is an opportunity to scrutinize areas where producers can reduce cost and improve breeding herd efficiency.

Herds with annual replacement rates greater than 50%, now the norm, are inevitably forced to keep bigger gilt pools…which then lead to higher overhead and operating costs and add further non-productive days that drag on system profitability.

Make no mistake, I am not advocating for the industry to keep every sow until she reaches her tenth parity. Nevertheless, with herd average parity hovering between 2.4 to 2.6, we are failing to capitalize on the sow’s most productive parities (2 to 4) as decreases in total born do not begin until parity 5 (Malopolska et. al., 2018).

In past interactions with the renowned Dr. Temple Grandin, I recall her discussing the informal surveys she did on commercial flights to ask consumers about what they thought of gestation stalls, with the results showing over 2/3 of those asked had serious issues with that housing practice. I wonder if Dr. Grandin renewed her survey efforts today and asked if consumers were comfortable with herds that had to replace over half of their breeding herd each year…would they share the same degree of concern?

The industry-wide increases in overall sow death loss have rightly received considerable scrutiny. The economics are simple too. If you do the quick math, each additional 1% in sow mortality adds a cost of at least USD $0.11/weaned pig. While overall sow mortality deserves continued attention, in this article I want to focus on the gilts that enter the herd but are prematurely culled before they reach their third parity, and thus never reach net profitability. According to the SMS database of over 1.6M sows, nearly 50% of the females lost are parity 0 to 2 females (Ketchum, 2019), and Pollman (Leman Conference 2012) reported that 42% of females selected for breeding have 19 or fewer pigs in their lifetime. 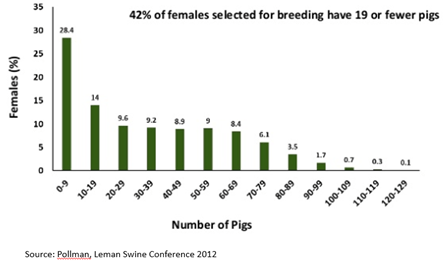 Peter Drucker, the world-renowned business consultant, was once quoted, “In most organizations, the bottleneck is at the top of the bottle”. I believe this quote can also be applied when it comes to our industry’s challenge with sow longevity and premature removal from herds. Our gilt development programs represent the “top of the bottle” in this example. While gilts are raised in various ways around the globe, there are some common opportunity areas where a ‘re-think’ may be warranted, and modernization may be beneficial to downstream production.

In North America, most growing gilts are housed in similar housing environments compared to their growing-finishing counterparts. Ad libitum feed access is provided until just prior to breeding, with most gilts receiving diets with marginally elevated levels of amino acids, vitamins, and trace minerals. While this rearing strategy is prevalent due to convenience, consistency, and availability, recent research suggests it may not necessarily be best for sow longevity (Calderon-Diaz et. al, 2015).

A review by Malopolska et. al. (2018) demonstrated that faster growth rates negatively influence fertilization and number of pigs born and raised in the first litter, as well as showing that gilts with faster growth rates were less likely to farrow and this was negatively associated with sow lifetime. In fact, feeding gilts a 50% lower lysine level from 30 kg to mating reduced sow mature BW by 4% and tended to increase sow longevity over six parities compared to growing gilts fed a high lysine regimen (Edge et. al., 2003).

In a different approach, moderately restricting energy intake (74% of ad libitum) by limit feeding throughout the growing period resulted in a 30% increase in live embryos per unit of feed consumed as reported by Klindt et. al. (1999) and similar reproductive benefits have been shown in multiple other experiments with moderate feed restriction.

Generally, attempts to reduce calorie intake by simply bulking up diets with available fiber byproducts have had limited success, with gilts compensating for the extra fiber by increasing daily intake (Coffey, 2019).  Similarly, research reported at the 2018 Leman Swine Conference (Lents et. al.) indicated that gilts that were fed a 15% energy restriction were more likely to remain in the herd and have a 2nd or 3rd litter.

We also must consider gilt management impacts on how females perform when they move to farrowing for the first time. By far one of the most common issues observed in commercial gilt development units (GDUs) is gilts that grow too fast and are bigger than ideal (135 to 150 kg) at breeding (Calderon-Diaz et. al, 2015).

Change feed presentation method to moderately restrict gilts from the end of the nursery period by targeting gains of 750-800 g/day (1.65 – 1.76 lb/day) until flushing two weeks prior to breeding.

If ad libitum feeding is the only option, add fiber, increase micron size, and adjust energy and lysine targets downward by 10-15% in order to slow growth rate.

Although moderating growth rate appears to be the biggest opportunity to gain ground on gilt retention, other management tools also exist. Too often, on-site GDUs are an afterthought when it comes to the daily management of the sow herd.

For barn design, the pens where gilts are developed need to mimic the environment that the gilts will experience once they are bred and enter production. Ensure your gilts experience the same flooring, ambient temperatures, and waterer types as they will once they enter breeding, gestation and farrowing. When possible, maintaining group integrity of gilts who were housed together in the GDU once they enter pen gestation is an opportunity to minimize negative interactions. In general, parity segregation has been shown to aggression between older and younger sows and increase farrowing rates in P1 and P2 females (Li et al. 2012). Group-housing gestating sows also has important characteristics to consider. Our previous blog discusses those.

Unlike finishing barns that usually operate as all-in all-out, on-site GDUs usually utilize a continuous flow pattern where groups of gilts are becoming eligible to breed each week. This presents a dilemma for sow farm design, as decision-makers are forced to choose between investing in additional feed system capabilities to properly phase-feed their GDU (ideally 3 to 6 phases) or to conserve costs and impose logistical limitations on how gilts can be fed. Unfortunately, the latter is commonplace, effectively hamstringing the nutritionist’s ability to properly feed gilts. Additional feed systems usually also require more gilt movement, increasing labor requirements, already lacking in the GDU. 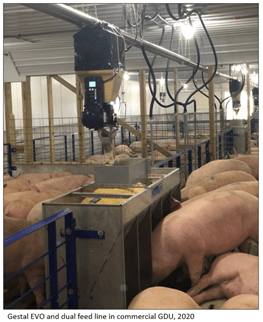 One alternative approach involves investing in commercially available feeding technologies that can incorporate precision feeding at the GDU level. By utilizing technology, such as the Gestal EVO Opti,  that can blend two base diets and deliver multiphase diets to a pen of gilts based on their age and weight, producers can reduce diet cost, increase feed efficiency (Frobose et al. 2014), and incorporate vitamins and trace mineral premixes for ideal skeletal development at an earlier age.

Pigs per sow per year (PSY) and pigs weaned per mated female per year (PW/MF/Y) are the commonly used values for comparing herd performance among sow farms. However, due to differing calculation methods, these metrics are of limited value beyond ‘bragging rights’ and they in fact may be contributing to the problem of poor retention rates.

Accordingly, there are increasing calls for calculations that better reflect the true economic pulse of the commercial breeding herd (Stalder et. al, 2019). One alternative proposed is to use pigs weaned per 100 days of herd life (PW/100DHL), which requires producers to consistently enter incoming gilts at a constant point, but this calculation may be a better reflection of a sow herd’s ‘true’ efficiency. As depicted in the table adapted from 13 example herds below, there are herds who rank poorly in the traditional PW/MF/Y calculation but perform well based on PW/100DHL. 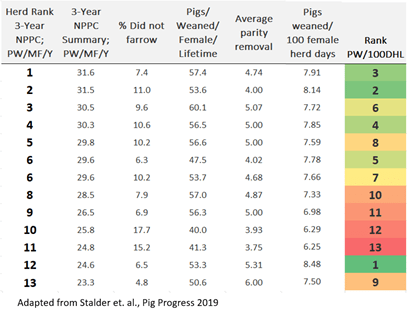 Gilts may have historically been thought of as a cheap investment, but as an industry, we have become accustomed to introducing gilts at an average of 70% to breed at a 55% annual replacement rate. This is a significant annual investment for the sow farm.

As shown by Holtkamp (2019), implementing a gilt management program yielded a 10% reduction in annual gilt replacement rate (62% to 52%) on a 2,400 head sow farm and resulted in 829 additional marketed pigs and 222,310 additional pounds of pork produced per year, ultimately yielding a benefit to cost ratio of 2.41:1.

Once you account for genetic premiums, overhead costs, and the currently low value of cull sows, isn’t it worth re-aligning your gilt development programs to improve herd retention?

You be the judge.