For decades, pregnant sows completed their gestation period on dirt lots and farrowed in these environments. As time went on, producers realized the benefits of a controlled environment when raising pigs, and gestating sows were brought indoors and housed in individual crates for their full pregnancy.

Although this practice had many benefits (females were fed individually and management was simple), welfare concerns have led producers to consider group housing options for pregnant sows and these alternatives have welfare-related shortcomings as well. Nevertheless, there are recommendations on how to design group housing to be successful and still control feed intake of each sow.

Sow Group Housing Feeding System: How to Choose the Good Option for Your Farm

When making the decision to group house gestating sows, there are numerous options on how to feed the sows (feeding system), the type of flooring, group structure, and group formation. Thus, the combination of options can become overwhelming.

In general, most decisions made when planning how to group house pregnant sows, revolves around how the animals will be fed. If pregnant females are not fed properly, other areas of concern are amplified (i.e. aggression). Thus, determining the optimal sow feeding system, is crucial.

As mentioned, there are numerous feeding solutions, ranging from floor feeding to individually feeding females with electronic sow feeders (ESF)[1]. We personally recommend that the sow gets isolated while feeding. 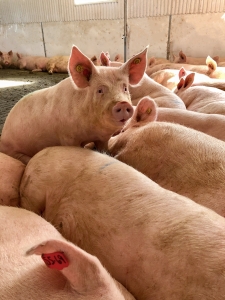 One of the greatest concerns with group housing gestating sows is aggression, which is easily aggravated if females do not have enough space. Providing gilts and sows with more space results in less aggression and less injuries, improving sow productivity and longevity[2].

Like space allowance, group size needs to be determined when making plans for group housing. A wide range of group sizes can be practiced and managed successfully. In general, females in large groups fight less, compared to small groups[2].

This difference in aggression is explained by large groups having more space as well as sows being unable to recognize all their pen mates and as a result, fight less[4],[5]. However, bigger does not always mean better. For example, finding an individual sow in a pen of 100+ animals, can certainly be a timely challenge. Thus, recommendations for group sizes for gestating sows vary based on space available, labor and management practices.

In addition to group size and space allowance, it is also important to decide how the females will be grouped together, as previous research has shown that group composition can have an effect on aggression[6],[7]. Specifically, research suggests grouping young females (gilts and parity 1 sows) separate from older sows (parity 2+) to minimize aggression[8].

Depending on the feeding system available, this grouping strategy would allow for producers to feed different diets or blends to young and old sows, better meeting their nutrient requirements.

Arguably one of the biggest concerns producers face when moving to group housing revolves around farrowing fate, and the increased risk of embryo mortality and even pregnancy failure, as a result of group housing. Because of this, mixing is strategized and done either pre or post-implantation.

Implantation occurs between days 11 to 28 of gestation and is defined as the period of time when the embryos attach to the uterine wall. Stress should be avoided during this time, as maternal recognition of pregnancy is taking place and many associated hormonal changes are occurring.

Thus, mixing is suggested to occur pre (day 4 of gestation) or post (day 35+/ pre check)- implantation. Research agrees that mixing should not occur during the time of implantation; however, research is inconsistent on which mixing strategy is superior[2].

When planning for group-housing, hospital pens do not seem to be a top priority or perhaps are not discussed in the detail they should be. Research and experience have shown us that gestating females in pens fight, and as a direct result, injuries occur.

Having a plan for injured sows is imperative to maintain productivity and animal welfare. Walking an injured 500 lb+ female to the nearest crate, can be quite the challenge. Thus, producers should carefully plan hospital pens to be successful, allowing for 3 to 5% of the floor space being designed for hospital pens.

Sow Group Housing Can Be Done with Success 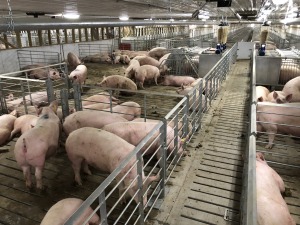 In summary, having success when housing pregnant females in groups can be done, but is a multidimensional variable that is impacted significantly by feeding system, space allowance, group size and composition, and time of mixing.

The list of considerations continues beyond the scope of this review, including group structure (static or dynamic), pen design (waterers, nesting walls, etc), flooring (slatted, partial slats, etc.), and bedding material (enrichment). It is important to be familiar with each of these topics to create the best environment and best opportunity for success.

Also, the companies with which you decide to work will impact the success of your installations. Knowledge and real-life experience of the situation are mandatory.

The Gestal 3G is a free access feeding system that combinates the benefits of a free access stall and of electronic feeding systems without their downsides. Developed by Jyga Technologies, which owners are producers, the system is reliable and allows for great results in gestation without having to train sows for multiple hours.

[4]Turner, S. P., and S. A. Edwards. 2000. Housing in large groups reduces aggressiveness of growing pigs. Proceedings of the 51st Annual Meeting of the European Association for Animal Production. The Hague, The Netherlands. 21-24.

[6]Kirkwood, R. and A. Zanella. 2005. Influence of gestation housing on sow welfare and productivity. National Pork Board Final Report.

What will impact the lifetime of your farm equipment? Swine production tips...