The effects of heat stress on lactating sows has been studied by several research institutions worldwide.  We can look at primiparous (first parity) or multi-parous sows but the results are similar (Williams, 2009)

For this discussion, let us look at farrowing room environment conditions of 68°F (desired) vs. 77°F (hot).  The period that should be most scrutinized is the ambient temperature from when the room is loaded until seven days after the sows have farrowed.  This is the only stage of swine production that two distinct temperature environments are necessary because we have both a mature sow and newborn piglets in the same area.

To date, there has been much research on temperature of gestating sows leading up to farrowing (Robbins et al, 2019).  Research of sows in groups has shown at which temperatures they are most comfortable. 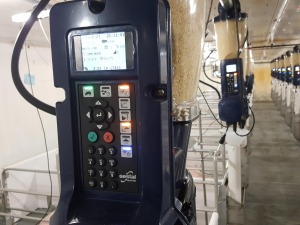 Figure 1. Gestal Quattro performance feeder can motivate the sow to eat at defined periods of the day and shows her consumption amount on the screen vs. targets for her parity and day of lactation. This feeder can also control the piglet microenvironment.

The Best Conditions for Lactating Sows and Improve Performance

For lactating sows, a general guide suggests 59-79 oF as the optimal range, and 59 to 90oF as the extreme min and max of the recommended thermal conditions, respectively (Salak-Johnson et al., 2010). A more recent heat stress study with lactating sows considered the thermoneutral conditions 64 to 68oF, and heat stress conditions 75 to 86oF. (Williams et al, 2013).

Because of the effects of airspeed, humidity, animal size, etc., these temperatures should be guideposts, with sow performance and behavior being the ultimate determinant.

Based on these results, 72°F has been the accepted norm for Europe vs. 68°F room temperature for North America.

The real discussion point is keeping the piglets warm without sacrificing sow comfort, feed intake, and milk production.  Unfortunately, it remains a common scenario to observe producers overheating farrowing rooms in an attempt to prevent piglet scours at the sacrifice of sow feed and water intake.

The main criteria to maintain creep environment is freedom from drafts and a defined laying area, as well as an acceptable temperature.

Learn how to improve swine production management during temperature variations:

This will entice the sow to get up earlier and eat more of her ad-libitum feed during the cooler morning hours vs. hotter afternoon and evening feedings.  Stimulating the sow early in the day will increase her total daily intake, and thus milk production to achieve heavier weaning weights and rebreeding success.

A programmable swine feeding system or frequent human presence can entice a sow to get up automatically at set periods throughout the day and allow nursing bouts after the meal to give smaller piglets more opportunities to get milk from one of the front teats which tend to produce more milk.

As long as the sow is able to stand up at her own free will, preweaning mortality is not likely to be impacted (Leonard et al., 2020) reported that lactating sows typically stand about 120 minutes per day.  A goal of precision feeding is to have her standing at multiple times per day vs. one longer standing bout.

2. Getting the right swine farrowing system and equipment 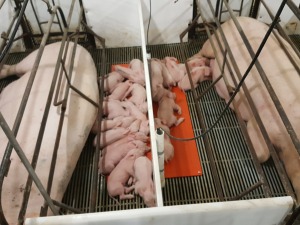 Figure 2. The cable near the middle of the heat pad transmits the surface temperature to the Gestal Quattro. The actual reading is compared against a target temperature for that day of lactation.

Analyze inlet leaks, whether you have gravity or actuated inlets. Granted, we ideally want cooler air dropping on the sow, but absolutely must prevent cool air from dropping over the creep area (Eichen et al., 2008).  This is more important since most USA producers don’t utilize horizontal hovers in the creep area.

The goal is to keep the sow at 68oF and the piglets around 86oF. In farrowing, ideally the heated zone should be uniform, rather than multi-temperate heat placement as in a wean-to-finish barn.

3. Avoiding to extra heat the sow

Heat mats have the inherent advantage of providing a rectangular area with bottom-up heat for the piglets, albeit through thermal conduction.  The heat is away from the sow so she stays cooler, and the placement discourages the piglets from sleeping in the crush zone near the sow after they have nursed.

Heat lamps provide a circular heat pattern via radiative and convective heat transfer with the hotter zone near the center. If lamps are used, try to keep heat from lamps away from the sow zone.

4. Encouraging employees to dress up

Encourage employees to wear long-sleeve shirts to have the rooms be cooler for the sow.  Running the room as “a hot nursery” should be avoided, not encouraged.  Warm air holds more moisture which leads to increased respiratory stress, as well as unnecessarily increasing electricity costs.  Granted, observation vs. a “one-size-fits-all” approach is best to prevent sow and piglet stress.

5. Getting sows on the farrowing feeding program earlier

Especially for batch systems, bringing the sows into the room several days before parturition has the advantage of getting them on an eating schedule for farrowing vs. their gestation schedule of one or possibly two meals per day on a limit-fed diet.  Stage the heat lamp to turn on at a set period before she is due to farrow.

A.M. Williams Thesis 07.15.2009.  University of Missouri-Columbia.  Effects of Heat Stress on Reproduction and Productivity of Primiparous Sows and Their Piglets’ Performance.

What will impact the lifetime of your farm equipment? Swine production tips...
Scroll to top