Feeding Systems in Farrowing : The Questions of a Producer

Alain and Donald Lefebvre are the owners of Ferme Aldo. In 1999, they decided to do a research on feed intake at their farm.  Although this was some years ago, the results are still relevant to swine production today.

The findings of the study, generated using Gestal feeders, from the ALDO farm were conclusive: maximizing feed intake during lactation is very important. Research has shown us that if sows lose weight during this period, there is a negative effect on subsequent reproductive performance.

A Commercial Research Project Over 5 Years

This research project took place over a period of 5 years in our 1,700 sow unit (2,200 sows in 2020), where we recorded performance of over 15,000 farrowings. Body weight and backfat were collected on every sow before and after her lactation period. This data allowed us to see the effects of lactation feeding within a commercial farm. Below is a summary of the results, suggesting that every additional millimetre of backfat loss after 2mm reduces the size of the subsequent litter by at least 0,2 piglets. 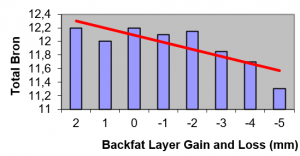 This is the direct result of sow feed intake during lactation. Sow feed intake must be sufficient enough to meet the lactating demands of her growing piglets as well as her own maintenance requirements.

Without an appropriate feed intake, the sow must draw inevitably from her own body reserves. In this study, we found that females should not lose more than 2 mm of backfat in lactation, which can be achieved with feed intakes higher than 6.5 to This is enormous considering that a sow consumes only 2.5 to 3 kg (4.40 – 6.61 lbs) during the first days of lactation. 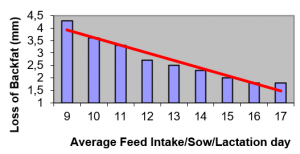 These data are proof of the importance of maximizing feed intake during lactation while also minimizing feed wastage. It is important to focus on the feed consumed and not only the feed dispensed.

Moreover, daily feed intake also has an impact on total pigs born in the subsequent litter.

Total Pigs Born vs the Feed Intake During the Previous Lactation.

Specifically, our data showed that sows with greater intakes in the previous lactation had more and heavier pigs in the subsequent litter. In fact, previous research has shown that every additional kilogram of feed consumed sows will gain about 300 grams per litter per day, as shown in the following table.

Effects of Larger Feed Intake on Litter Weight at Weaning

This is why it becomes paramount to know, in real-time, the feed consumption of our sows during lactation. The Gestal feeding system allows the producer to know exactly how much feed every sow is consuming, because every individual animal has its own feeding habits.

A lot of factors can modify lactating sow feeding behavior. One of the most influential factors on sow appetite is the thickness of her backfat (or body condition). The fatter a sow comes in lactation, the less she will eat. After all the findings presented above, less appetite in lactation is not something we want to aim for. Less appetite means more backfat loss… more backfat loss leads to poorer performance for the subsequent parity. 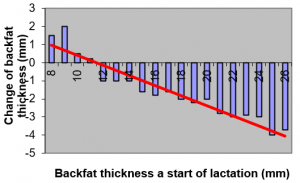 This is why we should also revisit how we feed our sows in gestation. We need to control gestation feeding to have the sows ready to perform in lactation.

Greater Feed Intake in Lactation is no Time Wastage

It’s now clear that working on feed intake in lactation and body condition in our farm allowed for us to improve our number of piglets per sow per year from 24 in 1998 to an average of 28 in 2002 to 2007.

Moreover, we also realized that since our sows are not drained/emptied/exhausted in lactation, we improved their longevity. In 1998, a sow had an average of around 40 pigs during her lifetime. We are now (2002-2007) over 60 pigs per sow during her lifetime.

Now that we have a better understanding of the importance of sow body condition and how feeding behavior in lactation impacts sow performance and longevity, it is now the producer’s responsibility to maximize the feed intake in lactation. This is how we can reach the full economical potential of our herds.

You can find additional research on sow feeding during lactation.