Can novel management practices through the use of electronic sow feeders yield lower stillborn rates?

Previously, I provided an overview of an investigative research trial that took place in collaboration with Gestal (JYGA Technologies, Inc.) and Standard Nutrition Company (Obermier, 2021). The primary objective of that summer’s (2020) study was to determine if feeding sows during nighttime hours impacted the time of onset of parturition and consequently, stillborn rates. Our findings showed that sows fed at 2 A.M. began farrowing earlier in the day (12:04 P.M. vs.  12:54 P.M.) and had reduced stillborn rates (8.40% vs. 9.74%) when compared to the “traditionally” fed sows who were fed at 7 A.M. Further investigation into the underlying physiology behind this difference and more testing with alternative times is needed and could lead us to making a more conclusive summary. With this main portion of the study being done, we utilized the remaining time on the farm to explore other means to reduce stillborn rates with the use of the Gestal Solo lactation feeders.

As an industry, we have a relatively good understanding of what causes stillborn piglets, with most cases being linked to the farrowing process itself. Prolonged births create a stressful environment for piglets to transition from an intra- to extra-uterine existence. This “stress” results in reduced oxygenation at the piglet level via uterine contractions which leads to low piglet vitality and/or piglet mortality (stillborn). More details on stillborns and the importance of why the swine industry must push forward on reducing them can be found here: Automated Feeders Offer Explorations into New Management Practices to Improve Stillborn Rates. From a broad perspective, the pilot study that took place during the last few weeks of the summer focused on the causative effect of why some sows exhibit prolonged farrowings.

Variables such as large piglets, high room temperatures, and sow age are commonly framed as the “causes” of high stillborn rates. However, these are all components that no automated feeding system can override. Peter Theil investigated further into sources associated with prolonged farrowing and alluded to “energy depletion “and “fatigue” at the sow level (Sorensen, 2017). Like other monogastric species, pigs absorb starch from their intestines in the form of glucose, which provides energy to the pig. This metabolic process takes place in the first 4-6 hours after feed intake. In Theil’s study, it was concluded that a longer time interval between the last feeding and onset of farrowing resulted in prolonged births and subsequently higher stillborn rates. Typical commercial farms in the U.S. feed their late gestation sows once (~7 A.M.) or twice (~7 A.M. and ~3 P.M.) daily. This means sows that farrow at 6 A.M. will have a 23 hr. or 15 hr. gap, respectively, between last feeding and onset of parturition. In Theil’s study, sows with greater than 18 hours between the last meal and initiation of farrowing had much higher stillborn rates than sows with less than a 6-hour interval (10% vs. < 4%, respectively). This difference is most likely accredited to a lack of energy at the sow level, creating a more stressful environment for both sow and offspring during the farrowing process. They recommended that high prolific sows be fed at least three times daily prior to farrowing to provide a constant energy supply, but this would likely only be feasible if automated feeders were at the farm’s disposal.

Other researchers have investigated different numbers of pre-farrow meals throughout the day, with no clear-cut consensus having being made on the “ideal” iteration of feedings or the timing of those feedings for late gestating sows (Gourley et al., 2020; Feyera et al., 2018; Vanderhaeghe, et al., 2013; Oliviero et al., 2010). Therefore, the purpose of this study was to note any differences between sows fed once, twice, or six times daily prior to farrowing. The current pilot-study took place at a 5,000-head farrow-to-wean farm in northeast Nebraska, USA owned and managed by Standard Nutrition Company. At approximately day 113 of gestation, all sows were moved to farrowing (18 rooms consisting of 56 crates per room). Upon entry to farrowing, sows were blocked by room and parity and were randomly assigned to one of three following pre-farrow treatments:

Quantity and feed delivery time were automated through the use of Gestal Solo lactation feeders (JYGA Technologies, Inc.) Standard farm protocol was followed for induction, farrowing assistance, and tracking reproductive performance. All induced sows were removed prior to data analysis.

After editing the data, 327 F1 sows of three widely-known genetic lines were available for analysis. The number of sows across treatments was evenly distributed, with gestation length and days on test being close as well (Table 1).

To no surprise, some variation was present in both parity and total number born across treatments. It’s well-documented that with larger litters at birth, there is a strong association with higher stillborn rates. Parity has a positive association with stillborn rates as well, but the effect is not linear and clear-cut as total number born. To account for these differences, they were used as covariates in a regression analysis to see if influenced the averages we obtained. Unfortunately, due to an insufficiency in observations per treatment, no significant regressions were found (Table 2).

Taking into account these finding as well as those of other researchers, it can be suggested that feeding sows once a day in comparison to twice or multiple times a day may result in prolonged farrowings and subsequently higher stillborn rates. However, we cannot make any distinct conclusions given the lack of significance found within this pilot study – which was expected given the brevity of the study.

With more observations, I am confident the data would have manifested into significant differences between treatments. It is difficult to determine if the impact of feeding iterations is linear or quadratic given the absence of the three, four, and five feeding periods in this study. Further work needs to be done in this area, with researchers across the globe having shown interest in feeding time and number in late gestating sows.

Outside of the potential to reduce stillborn rates by feeding sows more times a day, producers may recognize other positive tangibles through the use of automated feeders. Specifically, the GestalSolo feeder starts each feeding period with a stimulation portion of a small quantity of feed automatically dropping into the feed bowl, enticing the sow to stand up (sows quickly learn this means a meal is available and will generally get up to eat). This is vital because it gives the sow an extra incentive to hydrate, flip sides to lay on (reduce shoulder sores), and ultimately keeps their bodies more “operational”. Since these periods will be consistent daily, welfare checks can be simple and more effective by completing them at the beginning of a feeding period since most sows will be standing up. In addition, daily reports can be tailored to the producer’s desires (i.e. identifying sows consuming under 60% for the last 3 days) and printed off daily in the office. It is not uncommon for farm managers and/or farrowing managers to be the individuals checking on these “out of sorts” sows, freeing up more time for staff to focus on other areas of production (i.e. Day 1 care/processing).

I’m sure there are many other benefits that I haven’t acknowledged or perhaps are underlying, but hopefully I’ve made it clear that these “untraditional” management changes deemed possible with Gestal’s Solo feeders have a much larger impact than just nutritional gain. No matter how you shake it out, it is becoming more and more evident that through the use of technologies, such as electronic feeders, the swine industry has hope of becoming more sustainable from both production and welfare stand points. Integrating these technologies into our farms is just the start, learning how to maximize their functions is where all the fun begins. 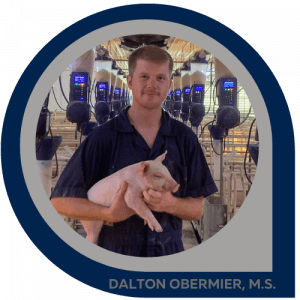 About the Author: Dalton Obermier, M.S.

I was born and raised in central Nebraska on a diversified farm where we raised and sold cattle, and pigs throughout my 4H and FFA careers. My roots have always been deep in animal agriculture so furthering my education in animal science was an easy decision. I attended the University of Nebraska to earn my Bachelors in Animal Science in 2018. From there, I moved halfway across the country to study Swine Genetics at North Carolina State University and ultimately received my M.S. degree in 2020. I am currently a PhD student at the University of Nebraska studying quantitative genetics under the direction of Dr. Benny Mote. Pigs always have, and always will be my main focus; as I hope to someday make a positive impact on the industry that has given me so much.