How to Select a Feeding System for Gestating Sows in Group?

The Conversion of Equipment to Group-Housed Sows: A Valuable Experience. 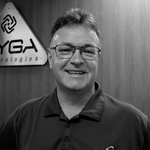 A few years ago, the Canadian swine industry announced its intention to conform to the new requirements of the Code of Practice regarding the farming of group-housed sows, a requirement by 2024. Therefore, since 2012, Mr. Blouin has been mandated to find the best solution to optimize the conversion of corporate farms to these new requirements. It is important to note that the expertise acquired during these years had to be neutral, as the company worked with several independent clients.

Following this announcement, many manufacturers and distributors gave up and stopped developing and selling their products, leaving their customers without resources. Others decided to refund their customers by referring them to established companies. Despite this, these producers faced a unique situation where their newly acquired expensive systems had no technical support or ways to be supplied. According to Mr. Blouin, these producers are called the ¨technological orphans¨. He refers to them throughout this text.

In fact, this concept, which has sadly become a reality, is defined as a producer whose manufacturer and/or distributor has ceased production/operation without prior notice, and who has no intention of respecting the planned agreement, in the interest to obtain a return on the investment. All this is caused by a lack of supply service, technical support and more… In this article, you will find several tips and advice to avoid this situation that is still raging for some producers.

The 7 Basic Criteria to Respect

A word of advice: “Buy your equipment from a manufacturer who has been in the business for many years and has been specialized in sow feeding,” recommends Mr. Blouin.

Based on his experience on the farm and in order to optimize the search for a system adapted to the actual need, Mr. Blouin has developed a list of criteria that becomes essential for the selection of the equipment: 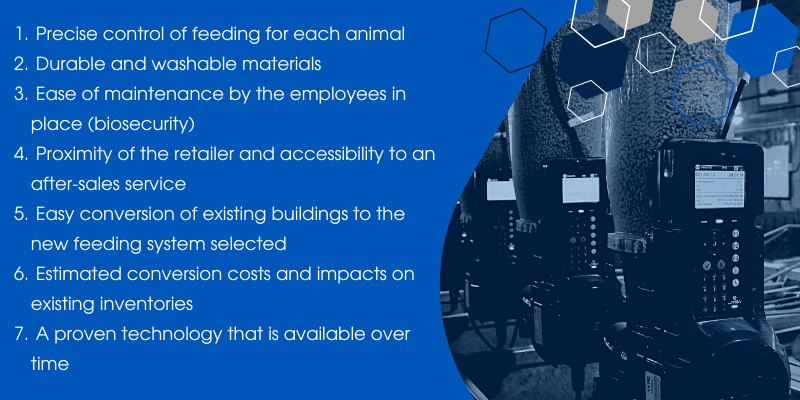 In fact, some farms were already feeding group-housed sows. However, in some cases, there was still a high level of non-compliance with the Code of Practice regarding surface area per animal. In addition, some farms were still feeding sows on the floor and/or with shoulder stanchions.

In these cases, both techniques clearly did not meet the first criteria. It is important to emphasize that precise control of feeding for every animal is very important for both herd performance and feed cost control.

In addition, animal welfare is an important element to consider in the list. According to Mr. Blouin, floor feeding, or shoulder stanchions feeding were certainly the most inadequate, given the fact that by using this type of competitive system, aggressions increase. Also, these systems increase culling and mortalities, as well as the stress level at the time of feeding.

In this situation, Mr. Blouin identifies two remaining options, either free access stalls or ESF. By opting for free access stalls, the sixth criteria of the previous list is not met. In fact, this option was considered by some producers where they had to choose between reducing their sow inventories by more than 30% or expanding their buildings, which proved to be an unrealistic economical option. The best option was to purchase the ESFs on the market.

ESF: What about Sow Training?

An 800 head sow farm was equipped with these stations at a ratio of approximately 1 for 60 sows. The distributor, which has had an excellent reputation for quality service for many years, was providing a high-performance European product from a manufacturer that has been in business for over 25 years. According to Mr. Blouin, this system met most of the criteria, except for the third one regarding the ease of maintenance (system with air cylinder, compressor, etc.).

However, with most criterias met, training gilts and second parity sows to return to the group for a second gestation was a challenge. In fact, despite an efficient training system at the quarantine stations, this operation was very demanding in terms of time and physical effort. According to Mr. Blouin, it is important to take this aspect into account when considering ESFs.

GESTAL 3G: A Hybrid Solution for Gestating Sows in Group 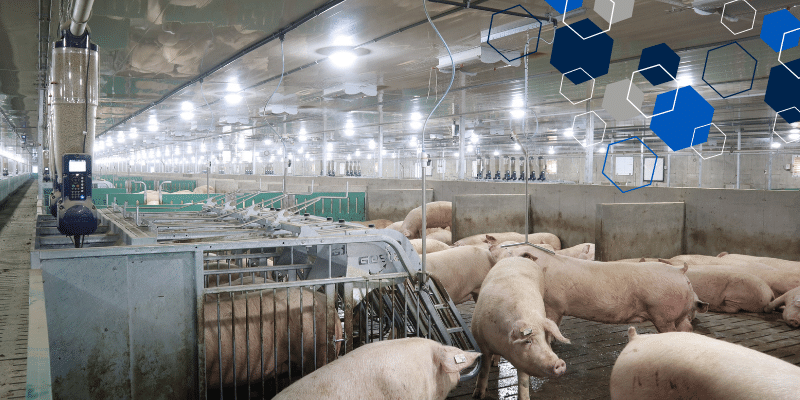 Jyga Technologies has established itself on the market with an innovative concept, a free access stall coupled with an ESF: the GESTAL 3G system. This feeding system for gestating sows is becoming more and more advantageous, since the amount of time available for animal training is decreasing. Also, the number of sows per station is about 15. This system is also beneficial for its ease of maintenance.  Indeed, it facilitates the maintenance of the system by the farm employees.

The Combination of an ESF and a Free-Access Stall: An Appealing Advantage

The 3G system was then installed on several farms following the release of this ideal combination.

“I am very proud today to have been a part of this experience. I liked the concept so much that I decided to join the Jyga team to distribute the 3G stations around the world and it’s a very rewarding experience, believe me” shares Mr. Blouin. Today, the 3G stations are in more than 34 countries and feed millions of sows.

The introduction of a new concept and modern technology to producers becomes a fear. However, after some time, producers say that there is a change in the behavior the herd where they tend to be calmer. They also point to the simplicity of using this new technology.

New Products on the Market…

Following the success of the GESTAL 3G stations, many companies have started to reproduce and sell this concept. However, it is important to respect the seventh criteria of the previous list which clearly indicates that a technology must always be recognized and available.

Unlike some opinions, the development of a swine feeding system is complex. The equipment must, among other things, be tested for leakage due to the environmental conditions present (gas, humidity, dust). Indeed, with the increasing cost of feed and the high prolificacy of animals, the systems must demonstrate precision and reduce wastage.

Also, to ensure the continuity of the development and programming of feeding curves and strategies, it is important to have  experience. Systems must be tested on the farm before they are put on the market. In other words, according to Mr. Blouin, no one can improvise himself as a manufacturer of sow feeding systems.

Unfortunately, in the situation of these ” technological orphans “, many producers bought new systems on the market, without these technologies being really tested in a farm condition. Soon, it was found that the sows were not fed or were fed very little. The accuracy of these systems was almost non-existent, there was no after-sales service, no technical assistance… In conclusion, the system did not meet the expectations.

A word of advice: “Don’t become one of those ‘technological orphans’: do your research carefully, a feeding system for gestating sows is an important investment that deserves serious consideration. If you have any questions during the process, our team of experts has many years of experience in the field and is available to guide you” advises Mr. Blouin.

“Since 2018, I have been working as the Director of Animal Welfare at JYGA Technologies, a rewarding job with a most qualified and passionate team. This job allows me to meet producers from all over the world with whom I have the chance to discuss great development projects.

Prior to this job, I was a breeding supervisor for a large and respected integrator in my region for over 30 years, where I learned my skills by starting on a corporate farm and then working on the road as a technical advisor and personnel manager.” – Sylven Blouin, Agr.

Visit a Sow-Farm: Take a Virtual Tour!
Scroll to top