How Does it Work and What Does it Look Like in the Farm?

Jyga Technologies’ CEO Alain Lefebvre has always seen his products, Gestal, Vision and Robust, as a key to producers’ successes since they are a great tool to help improve herd performance and profitability. Mr. Lefebvre shared with us his vision for the company. ‘’As a pork producer myself, I think that giving the possibility to producers to choose the best tools for them is the way to go.’’ This is the reason why Jyga Technologies now has data available for 3rd parties!

Jayne Jackson, Product and Sales Manager for PigCHAMP, sees the production of tomorrow as a collaboration of multiple platforms and companies from which producers could choose the best one for them. She wishes that producers could get a 3D picture of their farm, not only multiple data from different areas (veterinary, feeding, ventilation, animal performance, etc.) that are not connected even though they have an influence on one another. PigCHAMP wants producers to be empowered and choose the best for their situation!

Jyga Technologies is happy that PigCHAMP decided to share data. We share common visions and we believe that, as a team, we are making producers’ lives a little easier.

Progressive Swine, located in Manitoba, Canada, is the first producer that could benefit of the direct link that was created between PigCHAMP and Jyga Technologies. Ron Winkler, Sow Production Director at Progressive Swine let us know how they use the API.  At the moment of the discussion, they were using it in one of their farms so that the breeding data be shared between the two softwares (Vision and PigCHAMP). This link was important for them because they are operating their farrowing room conventionally, which means they have a lot of sow movements in their farrowing rooms. Data being shared is highly contributing to their success.

Before using the API, the breeding dates were written on the sow card by hand. Then another employee would go through the sow cards and enter the data in the Gestal software. This 2-step data entry had a higher risk of creating mistakes. And just like every producer, they could not afford a mistake.

How Does the Data Sharing Works?

Some producers might be afraid it is too complicated to use an API to share their data between two platforms. Mr. Winkler explained how it works in their farm. He told us that they do not have to do anything once the data is entered in the PigCHAMP (software or app). It is just shared automatically every 15 minutes with Jyga Technologies’ Vision software.  They do not even have to click a button.

Moreover, it took them approximately 30 minutes to set it up directly from the office. No one from the administration had to get to the farm for the setup.

On PigCHAMP’s side, Mrs. Jackson explains that every producer using the PigCHAMP Client Hosted Application(CHA), within their own network, or is online user of PigCHAMP, can set it up really quickly. PigCHAMP developed the Feed-In (cloud-based tool), on which producers create the link themselves for data sharing. It takes less than 30 minutes to set up, and afterwards there is nothing to be done again. Data will just continue to be shared automatically. 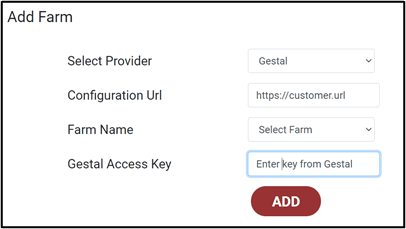 Mr. Winkler said: ‘’In a conventional farm, I would definitely recommend it. Because the farrowing dates are important. You need to know when the next sow will be coming in.’’ In addition to fewer data entry, Mr. Winkler told us that it lowered the number of fights between employees regarding wrong entries. So, it was a game changer for them and made everyone’s life easier!

Why Did Jyga Technologies and PigCHAMP Decide to Share Data?

As a pork producer himself, Alain Lefebvre, commented that hearing Mr. Winkler’s comments made him feel as if he achieved something. This is exactly the goal he is aiming when working with his team. He wishes to develop tools that will really help producers.

” There are already too many things to worry about when you are a producer. We want to give them a break from the uncertainties and help both their team management and farm productivity.’’

It is rewarding to see groups of producers such as Progressive Swine that believe in our Gestal smart feeders and want to work more and more with us. Mr. Winkler plans to implement the Gestal-PigCHAMP API to their other farms.

On PigCHAMP’s side, Jayne Jackson is more than happy with the data sharing, for three main reasons:

It helps producers save time since they do not have to double enter their data.

PigCHAMP is very strong on validation and logic coming in from the PigCHAMP database. With the data being shared, the logic and validation now extend to Gestal. For producers, PigCHAMP makes sure that they will have the most accurate data possible while minimizing data entry and mistakes. This collaboration ensures that all the animals get feed at the right time and at the right place.

3. Stepping through the future

PigCHAMP wants to look at the industry as a whole. They see all of the suppliers and producers working together in the future. They want to open this door of having a holistic picture of how the farm works.

Jyga Technologies and PigCHAMP have a lot in common. We are both proud to make our tools available to all the pig producers around the globe.  We are also open to share our data with any other supplier. ‘’I am proud that we can offer choices to our clients. I am proud of how quickly and easily Jyga Technologies and PigCHAMP worked together. It’s a powerful thing if we can all get to the table and imagine the future of the world.’’ Jayne Jackson, PigCHAMP.

Before implementing a new tool, ask yourself: Will it save time? Will it save money? Will it make my life simpler? If it doesn’t, then why even considering it?

Today, anyone using Gestal and PigCHAMP has an easier life. And we are making producers, like Progressive Swine’s lives simpler.

We are pleased to say that we listen to our customers and that it changes their lives!

A special thanks to Jayne Jackson and Ron Winkler for their time and generosity.

You are using Gestal and PigCHAMP and would like your data shared? Contact sales@pigchamp.com or to find a local representative please click here. They will help you get through it in no time!

You are using Gestal and another herd management software and would like your data shared?