FEEDING A FARROWING SOW: WHAT SHOULD WE CONSIDER?

From feeder costs to feed palatability, here are some of the hot topics to think about when you are choosing the right sow feeding system for your farrowing rooms.

Farrowing sows play an essential role in pig production since sow and litter performance can influence the swine industry’s next outcomes. Considering that, management strategies during farrowing must be conducted based on effective protocols and consider multiple factors that can impact sow performance, including nutrition, housing, health, environment, genetics, and others (Kraeling and Webel, 2015).

Although swine nutrition and its effects on farrowing sow performance have been highly investigated by the scientific community (Serena et al., 2009; Feyera et al., 2018), some concerns arise regarding how to implement those diets from a practical standpoint. Thus, discussions about swine nutrition go further than diet formulation and include the different feeding systems that can influence pig performance and farrowing management. 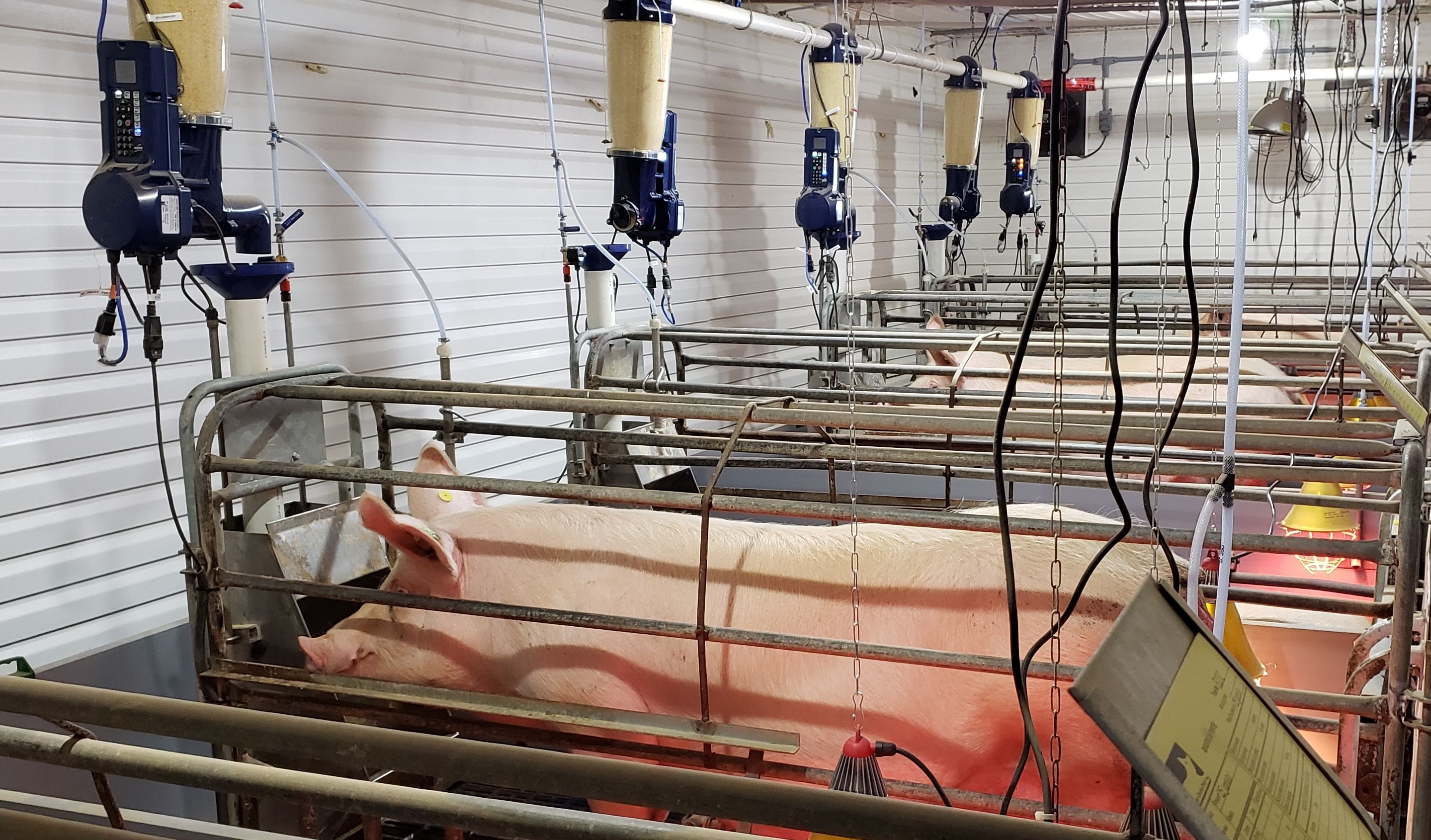 Farrowing Feeding Methods : How Was it Done 20 Years Ago?

Feeding systems for farrowing sows have been updated during the last years. Up until two decades ago, hand-feeding sows were part of all farmers’ job routines since it was the conventional way to distribute feed in the farrowing rooms. On traditional or small farms, feeding sows by hand is still common. In this type of feeding strategy, decision-making mainly relies on observation and personal experience: the person responsible for feeding the animals must check the sow’s feeding behavior and decide how much feed needs to be added based on the previous meal results.

Farrowing Feeding Methods: How is it Done Now?

The swine industry has gradually invested in feeder options that changed how to manage sow feed intake from an observational standpoint to data collection and analysis. With different technology levels, engineered feeders have become an alternative to hand-feeding, from automatic feeders based on spirals or chains (dispensers) to electronic-based feeders that can register in real time the volume and weight of feed delivered to the farrowing sow (Thomas et al., 2018).

What to Consider When Improving Sow Production Profitability and Productivity?

Focusing on a commercial perspective and considering a multifactorial approach, this article compares different options for farrowing feeding systems. Although those factors are correlated, this article summarizes them into hot topics to facilitate reading and discussion. It’s also important to note that there is a considerable variety of feeders for farrowing sows, grouped in this article as hand-based systems and automatic/electronic feeders.

Costs Evaluation from the Farrowing Feeding System to Feed Management

Evaluating costs between sow feeding systems can be tricky since it can be observed from the feeders’ price or its return on investment (ROI). First, when it’s considered only the feeders, hand-feeding has the advantage, as it is one of the main reasons this system is still widely used. Naturally, costs will increase with the technology level present in the feeder. Besides that, there are also costs related to feeder’s implementation and maintenance, minimized in hand-feeding systems.

However, when not only the investment (how much it is expended in the feeding system) but also the return (the efficiency or profitability of this investment) are taken into account, automatic feeders become more competitive. To calculate the return on investment for installing Gestal feeders, submit some information with our ROI tool.

As will be detailed in this article’s next topics, automated and electronic feeders’ monitoring can improve sow performance, positively impacting litter performance and farm profitability.

Housing Design and Versatility of the Feeding Solution

Hand-feeding and electronic feeders are compared by their management advantages . Hand-feeding systems are less complex considering the farrowing rooms’ design. The main point about housing layout is ensuring that hand-fed sows have their heads facing the walkway, facilitating feed distribution and access to the feeders. On the other hand, electronic feeders adapt to room designs. They only need a feed line passing over the feeder. For sure, some automatic or electronic feeders require high energy levels from the facility. Others, such as Gestal, require minimal energy levels since the feeders are designed to work one after the other.

Electronic feeders rely on data acquisition and avoid decision-making based on human observation of how the animals are eating (which is very important but also imprecise). These systems are also very welcome in research trials with the most distinguished purposes (Obermier et al., 2019; Menegat et al., 2019; Cabezón et al., 2017).

The choice of the feeding system also influences how employees are allocated into the farrowing rooms. It is crucial to clarify that staff plays an essential role in all the feeding systems to guarantee that the sows follow the expected feeding behavior. Hand-feeding strategies must be managed by trained employees who can rapidly intervene when the sows are not following the feeding curve. Moreover, farm managers must conduct effective schedules and protocols to avoid practical issues before or during feeding distribution. Most farms work with 2 or 3 meals per day using hand-feeding systems, which cannot necessarily match the sows’ appetite (Laylor and Lynch, 2007).

Training is also key when farrowing rooms are equipped with electronic feeders. Training can be minimal or more complex depending on the electronic feeder selected. With Gestal, an employee that can minimally use a cellphone is able to operate the farrowing feeder. Moreover, farm managers must be familiar with data analysis to explore the software possibilities and adjustments better. Some electronic systems, like Gestal smart feeders, are autonomous: these feeders work correctly and continuously even if the computer fails.

Therefore, automatic feeders require fewer people in their operation than hand-feeding, focusing on employees with good nutritional/animal knowledge. Considering that, you can reallocate employees to other farm procedures that demand human intervention, like watching the piglets. However, all feeding systems, including the most advanced feeders, can’t work correctly in their maximum potential without human supervision at some level.

At Christal Farm, the use of the Gestal Quattro makes a difference in time management, Kevin Tétreault explains how in this video.

Discussions about the pros and cons of farrowing feeders cannot forget to mention water management and feed waste. Any feeding method’s success works together with the watering system, which must meet the sows water consumption requirement.

Besides providing enough water, adequate feeding and watering systems also reduce water waste. Considering that, Peng et al. (2007) compared a self-fed wet/dry system (where feed and water are dropped together in a common area of the feeder) and a hand-feeding system (dry meals twice per day). Results showed that both feed and water disappearance and wastage were lower using the self-fed system. For example, 232 L of water was wasted during the lactation period per sow using the hand-fed system, while the self-fed system wasted an average of 15 L. When these results meet commercial realities, it also involves a significant variation in water and feed costs.

Sow performance can be improved when it is managed with liquid feeding. Lynch (2001) and Peng et al. (2007) highlight that lactating sows prefer wet feed compared to dry feed, especially during the hot seasons. However, wet meals must be offered under constant supervision and great attention to feeders’ hygiene and cleaning. As an advantage, some automatic feeders include a sensor level, which avoids the accumulation of feed if the sow doesn’t finish the last portion. In the Gestal smart feeders, for example, the feed switch also operates as the sensor level.

The literature also points out that automatic feeders improve feed disappearance in lactating sows by 7% with ad libitum access to dry feed, as reported by Peterson et al. (2004). Moreover, some of the automatic feeders include a feeding procedure that decreases feed waste: initially, a drop of feed is placed into the feeder, having the same effect of a “call to eat” situation. More feed is just dropped if the sow hits the feeder switch. Feed drops are also distributed in small portions, as this system is controlled and administered by the sows.

From the previous topics discussed in this article, it’s possible to observe that farrowing feeding systems can affect sow performance (Piñeiro et al., 2019). Some highlights can be made regarding the benefits of using electronic feeders during farrowing and its impact on sow performance. With sows with better body conditions due to more effective feeding management and monitoring, it’s possible to achieve a shorter wean-to estrus interval and a higher number of piglets at the next farrowing.  Electronic feeders can also minimize extremes and fluctuations in the herds’ body condition since sows are fed following their specific pattern and needs. With higher feed intake, milk production can also be increased, positively impacting the litter weight at weaning. Those positive effects, observed by the users of the Gestal feeding system in farrowing, are related in a video testimonial by Mr. Sylvio Blais and Mrs. Nancy Bety. However, pig farms and research groups must better understand the direct links between the type of feeders used in the farrowing rooms and sow performance.

Besides the advantages and disadvantages within all feeding systems, it’s important to highlight that the best feeder is the one that better fits the farm management protocols and demands. The main advantage of hand-feeding is that the system/equipment is cheaper.  However, that advantage is questioned from a management standpoint since hand-feeding systems require extra labor, increasing employees’ demand. On the other hand, electronic feeders allow a higher decision-making power for sow farm managers, including, to list a few, improvements in sow performance and optimization of feed and water usage.

Leading the electronic feeding segment, Gestal offers multiple options for farrowing feeders that fit the most specific farms’ needs. Standalone smart feeders from Gestal are compatible with every type of building, require minimal energy levels, and represent one of the best precision feeding technologies on the market. Herd management also gets more accessible and effective by simple and user-friendly software and mobile applications with real time monitoring. 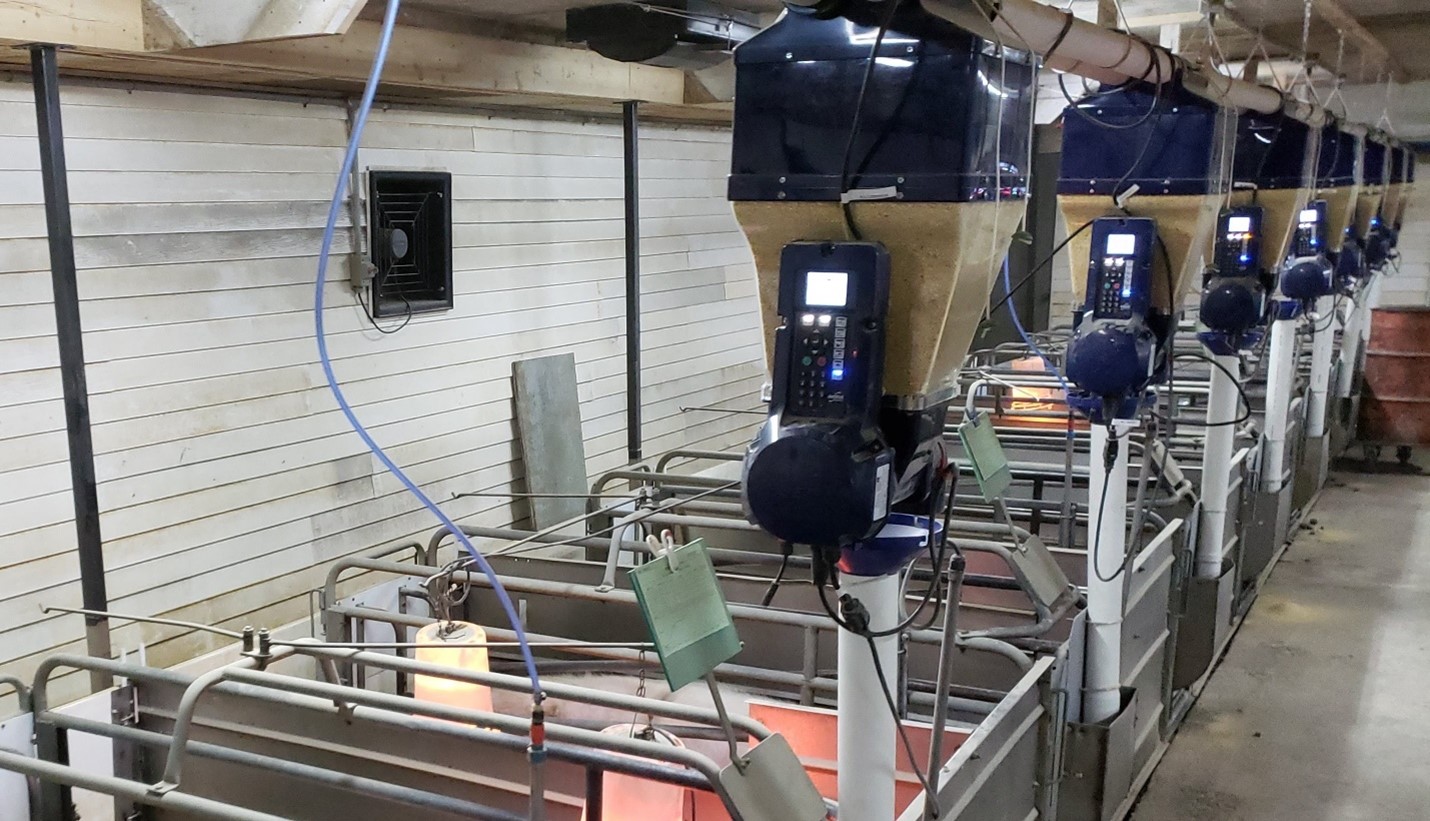