INCREASE YOUR PERFORMANCE WITH

During the last thirty years, swine farms changed totally before our eyes; the way of administrating them as well as the way of running them changed. Now, the competition between the different farms is strong and sustained. Today, producers do not any other the choice but to be efficient, productive and competitive.

Thirty years ago, producers could choose their protocols, their employees and the place where they would put their animals, but their production could not surpass their animals’ potential. Therefore, genetics companies selected the breeding animals in order to improve various genetic traits and finally produce a more prolific animal which produce more milk and fatten more easily. To satisfy consumers, they also created a leaner animal. If thirty years ago swine’s genetic potential constrained producers, now most farms do not reach their animals’ new potential. Few farms produce 30 piglets per sow per year and sows are culled earlier on average. This situation hurts badly the producers by increasing their operating costs.

Several renowned scientists investigated the situation in farms all around the world. They concluded that various aspects of a farm operation such as the alimentation limit the performances of breeding animals specifically the sows’ ones. Indeed, they discovered that underfeeding or overfeeding lactating sows have important consequences on the herd’s performances. In the following pages, we will explain how the breeding animals have changed over the years, how feeding adequately your sows can impact your performances and how automation can help you reach the full potential of you herd.

In order to improve herds’ performances, genetics companies selected breeding animals to get leaner and more prolific hogs with a better food conversion ratio. Indeed, as a study led by Dr. William Close and Dr. Des Cole state it; in 1975, sows had on average 2 litters a year and weaned around 17.5 piglets per sow annually whereas, in 2010, they have the potential of weaning over 30 piglets and to have 2.55 litters a year (Graph 1). This study published by the Doctors Close and Cole showed that sows’ backfat has been reduced by half in the last 35 years. In fact, between 1975 and 2010, the sows’ backfat decreased from 20 mm to 9 mm (Graph 2). So, they produce twice more piglets while with fewer body reserves. Consequently, they cannot use their energy reserves anymore to sustain the important milk production which is necessary to feed their piglets adequately. Breeders should then find another way to provide the sows with that energy. As Michel Vignola (Agron.) wrote in 2009 based on the works of Dr. Frank Aherne, and of Jean Noblet, Michel Étienne and Jean-Yves Dourmad from the INRA : “Genetic improvement for both weight gain and lean has resulted in either a reduction in the sow appetite, or intakes have not increased in the same proportion as their energy requirement.”

To summarize, modern sows are leaner, have less appetite (Graph 3) but they should increase their milk production to satisfy larger and heavier litters (Close and Cole, 2004, and Schinckel, Einstein, Schwab, Duttlinger, 2009). In 2004, the Doctors Close and Cole added that: “[the changes that occurred in the modern sows] not only changed the metabolic needs of the sow, but has also made modern genotypes more sensitive to nutrition than their predecessors, which had ample body reserves at the start of their breeding life.” Therefore, their nutriment ingestion during lactation should increase by far; it is creating inevitably an additional challenge for the producers: maximizing the potential of their sows and their piglets while keeping the sows in good body condition during the whole reproductive cycle. These metabolic changes put an additional pressure on the sows; thus, herds’ average culling rate increased up to 50% in accordance to the Drs Close and Cole’s studies as well as a study published by the Doctors Stalder, Engblom and Mabry from Iowa State University in 2009 (Graph 4). So, such as Doctors Rommel Sulabo and Steve Dritz from the Kansas State University’s swine research unit said it: “The major goal for managing nutritional programs for sows in lactation is to maximize milk production without incurring substantial losses in body condition that impair subsequent reproductive performance.” Then, we do not have the choice anymore, we should feed them!

In a study published in 2006, the specialists in swine nutrition Dr. Robert Goodband, Dr. Mike Tokach, Dr. Steve Dritz, Dr. Joel DeRouchey and Dr. Jim Nelssen from Kansas State University stated that “To take up succesfully the challenge of keeping a sow in good condition, everything must be done to maximize lactation feed intake for lactation length.” The researchers Jean-Yves Dourmad, Michel Étienne and Jean Noblet from the French National Institute of Agronomical Research also established the importance of maintaining sows’ body condition during the lactation to limit reproductive problems later on and to maximize sows’ longevity (1998). They also specified that the best way of doing so is “to follow a feeding strategy customized to each sow that take into account its production, its behaviour and the environment.” (Dourmad et al., 1998). If breeders fail to maximize their sows’ feed intake, the sows will suffer an important weight loss caused by the use of their own energy reserves, which are nearly nonexistent in today’s hyper-prolific sows, to fulfill their energetic needs and to produce sufficiently milk to satisfy their piglets’ growing needs. In fact, the use of body reserves generates the reduction of litters’ weight, smaller subsequent litters, a longer weaning-to-oestrus interval and a lower farrowing rate (Aherne, 2001; Goodband et al., KSU, 2006; Andries, Prairie Swine Center, 2003). These effects would force breeders to cull their sows earlier. Thanks to the database PigCHAMP, the Doctors Stalder, Engblom and Mabry discovered that sows are culled on average at 4.5 parities (2009). In addition, herds’ culling rate reaches nearly 50% (Close and Cole, 2004). The Dr. Stalder from Iowa State University added in 2011 that sows are sometimes culled before they can get profitable for the organization. Many specialists agreed to establish the break-even point of a sow after its 3rd parity, and many sows are culled before that. In addition, the hogs’ performances in finishing units are also affected by the sows’ feed intake because their weight at weaning is lower according to the results of a study made at Kansas State University by the Professors Tokach, Goodband, Nelssen and Kats in 1992 (Table 2).

According to another study published by the researchers from Kansas State University in 2006, increasing the sows’ feed intake by only 1 kg per lactation day has important consequences on several elements of its reproductive cycle (Goodband et al.). In fact, the herd’s farrowing rate can increase by 8%. (Appendix A; Goodband et al., 2006) and the weaning-to-oestrus interval can decrease by 1.8 days (Appendix B; Goodband et al., 2006). In addition, a sow can deliver an additional 1.5 piglet alive by eating the same additional kilogram of feed per day (Appendix C; Goodband et al., 2006). The swine specialist, F.X. Aherne, claim, in 1998, that each additional kilogram of feed intake increases the next litter size by 0.65 piglet. Also, sows do not have to restore their body reserves during gestation because they did not use them during lactation. Therefore, the feed distributed during gestation to the sows decreases which also diminish the cost of feeding sows in gestation. Indeed, keeping a sow in good body condition can cost only a third of the cost of restoring its body reserves during gestation. (Quiniou, Courboulay, Salaün, Chevillion, 2010) Moreover, if sows do not use their nutrients and minerals’ reserves during lactation, they have a smaller risk to be culled early because of injuries or infertility. Indeed, in the September 2000 Compendium magazine, the Professors Dritz, Tokach, Goodband and Nelssen, affiliated to the Kansas State University’s swine research unit, stated that “To maximize the longevity of these sows, management must use a feeding strategy that maximizes feed intake during lactation and minimizes the loss of body stores of energy and protein.” All these production advantages have their economic equivalent. In addition to all these advantages for the sows, piglets also benefit from the sows’ feed intake increase. Indeed, several studies published all around the world showed that on average the litter weight increases by 0.3 kg per day when the sows eat an additional kilogram per day of lactation (Table 1); the increase in weaning weight will then have a positive influence on pigs later on in finishing units (Table 2).

*Pigs were weaned at an average of 21 days.
Swine Day, KSU, 1992
To maximize the sows’ feed intake and its performances, we should encourage the lactating sows to eat by making sure they always have access to fresh feed. (DeRouchey, Dritz, Goodband, Nelssen, Tokach, 2007) The Doctors Close and Cole highlighted that overfeeding sows at the beginning of the lactation can decrease its voluntary feed intake later on when piglets will need more milk to grow (2004). The best way of maximizing lactating sows’ feed intake is to divide up the total quantity of feed into several smaller meals (DeRouchey et al., 2007) that will match each sow’s customized feeding schedule (Aherne, 2011) in order to avoid a predisposition to MMA (Close and Cole, 2004).

Feeding manually lactating sows is a difficult task that needs a lot of time, concentration and consistency. Thus, you cannot allocate this task to anybody.

Your employees, will they take the time to correctly feed your sows every day? The feed distributed, will it vary depending on which employees are working that day? Will it be well recorded? Do your employees have the time to do well this essential task? Today, not maximizing your lactating sows’ feed intake, is it even an option?

If your sows receive less feed one day because one of your employees is tired or less concentrated, your sows will not eat more the day after; however, they will produce as much milk as they would normally by using their energy reserves which are nonexistent in today’s hyper-prolific sows instead of the nutrients present into their feed. The negative effects of their body reserves’ utilisation will then begin.

In 2007, Kansas State University, in their nutrition Guide, established a way of feeding lactating sows manually to maximize their feed intake. Since then, technologies and equipments evolved, and now the specialists in swine nutrition from Kansas State University are highly encouraging the automation of the lactating sows feeding process (Mike Tokach, Personal Communication). 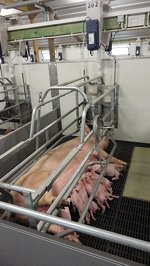 Fortunately, the individualized feeding system GESTAL can do it for you. Gestal maximizes the sows’ feed intake by distributing feed to each sow according to a personalized feeding curve. As a result, the herd’s farrowing rate increases, the weaning-to-oestrus interval is reduced, the gestation feed consumption and cost decrease, the sow’s productive life is prolonged, the next litter size and piglets’ pre-weaning weight increase, piglets of uniform size are weaned, and, finally, the feed wastage produced by the sow decreases significantly.

In addition to all these benefits, Gestal allows the sows to communicate directly with breeders through the system. Producers can know precisely their sows’ feed intake and days they are feeling bad by following their feeding behavior. So, sows can reach their full potential at their own rhythm. Gestal, it is reaching each sow’s full potential by treating them individually, and the reduction of feed wastage.

Gestal divides-up the daily feed intake in multiple smaller meals throughout the day. Thus, fresh feed is always available. It is precise and consistent. Moreover, it records and stores each sow’s consumption data. Gestal determines easily and rapidly sows with lower and higher feed intake. With Gestal, you can compare each sow with one another. Gestal follows the sow’s rhythm and adjusts itself to its feed intake potential. It is always available and user-friendly.

Gestal, it is your lactating sow’s welfare, the enhancement of your performances, and a real possibility of savings.

Aherne, F.X. (2001). Feeding the lactating sow: a blend of science and practice.International Pigletter,September, Vol.21, No.7

Andries, B. [Prairie Swine Center]. (January 2003).The Importance of Feed and Feeding the Lactating Sow. Centred on Swine, vol.10 no.4. Available at: http://www.prairieswine.com/the-importance-of-feed-and-feeding-the-lactating-sow/