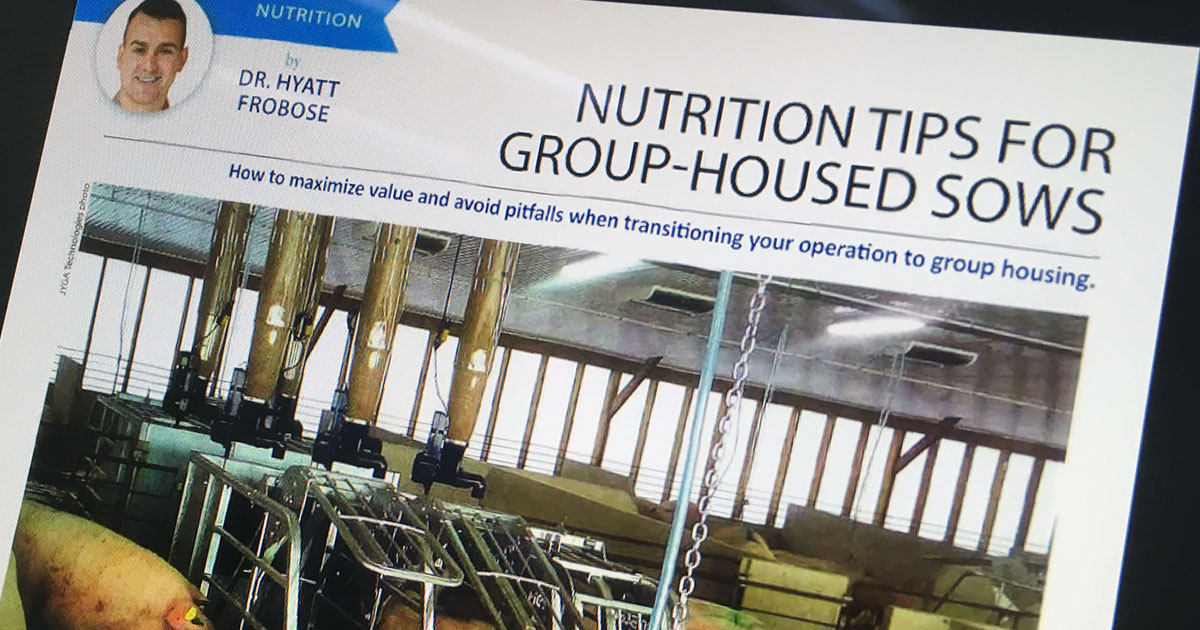 First, let’s consider the primary challenges that producers face when managing sows in pens. The major ones that corne to mind are aggression between sows at initial mixing, food-directed aggression around the feeding and drinking areas, and challenges with lameness.

Luckily, gestating sows are the stage of pig production where fi.brous feedstuffs can be most efficiently utilized. Sows have a fully developed large intestine which can digest and absorb energy from soluble fi.ber sources.

From a group-housing standpoint, this increased bulk provides the added benefit of increasing the satiety of sows, resulting in sows spending a greater amount of time lying down and digesting, rather than competing with other sows for additional feed. Finally, a higher fi.ber gestation diet has also been shown to help increase feed ,’ intake as sows transition into farrowing.

While the se ingredients can be useful tools, it’ s also important to remember that they are variable in quality and nutrient content, and producers and nutritionists must actively monitor these grain by-products to avoid unintended negative effects.

Depending on the pen design, producers and nutritionists must also consider the environmental effects of housing on a gestating sow’s nu trient requirements. For example, sows housed in large pens with ESF stations must travel farther to and from the feeding area, thereby having higher activity levels and expending additional calories compared to sows immobilized in gestation stalls.

But group-housed sows also tend to lay together and thereby reduce their maintenance requirements for generating body heat compared to stalled sows. Consequently, researchers are trying to determine if producers can reduce dietary energy levels or barn heating costs by lowering the ambient temperature of group ­housed sow areas.

Sows’ feet and leg health also have to be considered in order to achieve optimal herd performance in group­housed sows. I often find these health considerations to be the biggest challenges during the initial transition. While adequate skeletal conformation is an initial prerequisite for entry into the breeding herd, lameness and mortality caused by aggression, flooring type, and/or inadequate nutrition (diet formulation or off-feed events) are often the biggest detractors in a group-housing system.

On a recent farm visit, a change in feed ingredients led to a 35 per cent reduction in bulk density, which meant that sows intended to receive 2 kg ( 4.4 lbs) of feed per day had only been receiving 1.3 kg (2.9 lbs) per day, which explained the poor body condition seen in a high percentage of the pigs. Develop a feed drop calibration routine in pens (and in breeding stalls) at least once permonth and stick to it!

On the brighter sicle, feeding sows in pens also creates some new opportunities to deliver precise nutrient levels to individual sows that were not available in previous gestation stall configurations. In most stall barns, a single feed line is used to deliver feed to all females, regardless of parity, and only the amount of feed provided can be altered.

This recently developed feed blending technology also affords nutritionists opportunities to phase feed sows in gestation by altering dietary amino acid and energy content per stage of gestation. Researchers are endeavouring to determine the optimal and most cost­effective way to present feed to the gestating sow.